Changes Made For Nashua

Our Focus With Nashua's Children 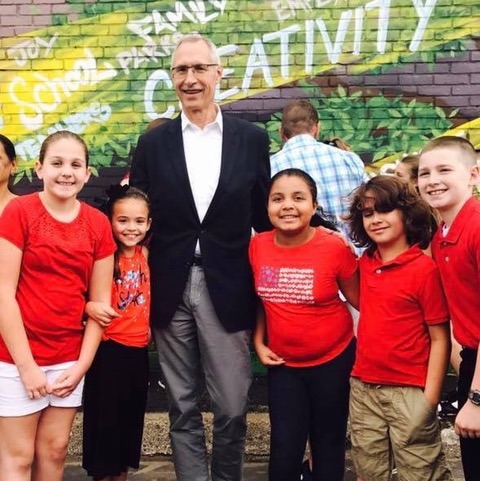 Of greatest concern to Jim is the well-being and success of every Nashua child. He believes that great schools and a caring community can make a big difference in outcomes for our children. According to Jim, Nashua must aim to provide an excellent education for every child, at every school, every day in Nashua. And as he sees it, educational excellence in Nashua’s schools is an important aspect of the city’s economic development blueprint. Jim’s efforts on behalf of Nashua’s children include: 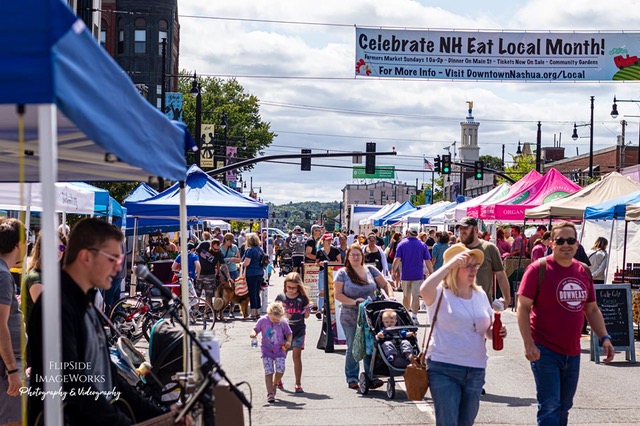 According to Mayor Jim Donchess,

“Much of what I work on as Mayor of Nashua is aimed at attracting Millennials to our city and at keeping them here. Young adults and young families are looking for a hometown where affordability and livability are equally important. So my efforts on behalf of these Nashuans include the work I am doing to bring fresh, new housing choices to the city, my drive for excellent schools, my support for commuter rail service between Nashua and Boston, the Performing Arts Center project, the city’s work to address climate change, the VeoRide bike-share and e-scooter-share programs, the Nashua Riverfront Development Plan, my encouragement of and support for the Nashua Farmers Market, the NuMuse and New England Roots live music festivals, the Nashua Pride Festival, the public art installations of Positive Street Art as well as the numerous parades, walks, races, and other celebrations throughout the year in the center city. This generational cohort has a very important role to play in Nashua. Our Millennials are absolutely crucial for the future success of our city.”

Jim also has his eye on Nashua’s rising demographic cohort of Gen Zers – loosely, our young people between 9 and 24 years of age. The mayor’s focus on these young Nashuans includes the following:

A City For Every Generation 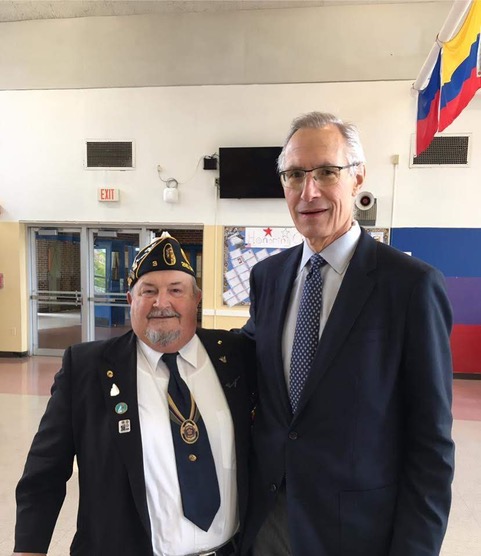 Contributing to the city’s inclusive character are the many community efforts to ensure that Nashua is and remains a great place at every age. Jim’s focus on seniors includes the following: 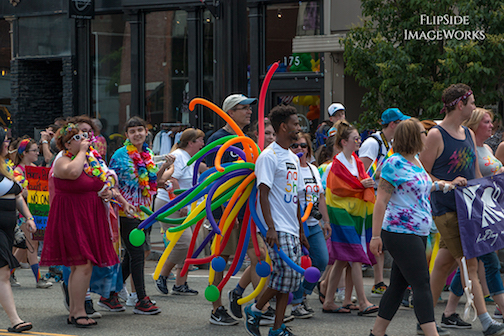 “We are the state’s most diverse community, a city built by waves of immigrants. We also take enormous pride in being the state’s most inclusive city, and we value every Nashuan, whether she or he is a long-time resident or a foreign-born newcomer to our city.”
Mayor Jim Donchess

Jim’s initiatives to promote Nashua’s character of inclusion include: 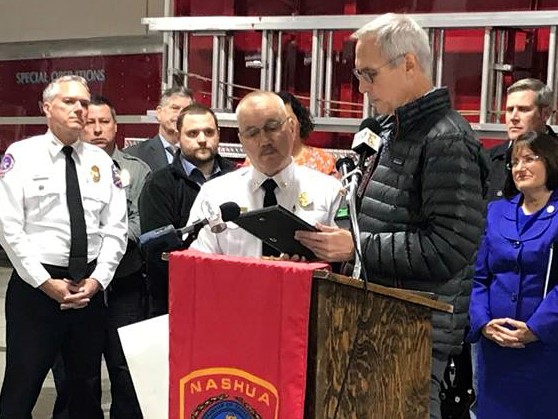 From the earliest days of his administration, Jim has been focusing on the opioid addiction public health crisis in our community. Jim’s initiatives include:

Our Big Focus On Street Paving and Other Infrastructure Improvements 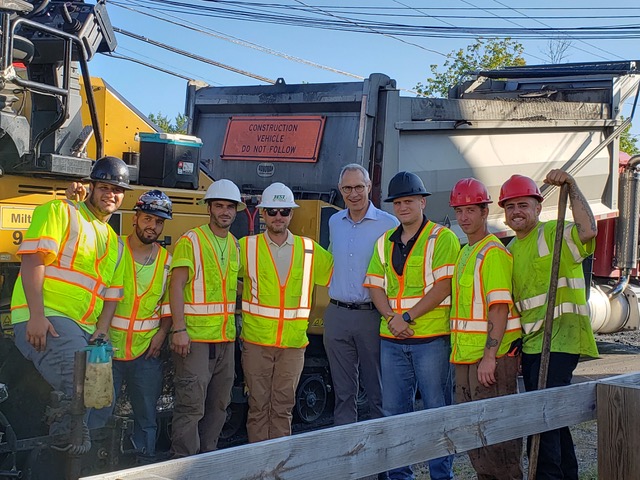 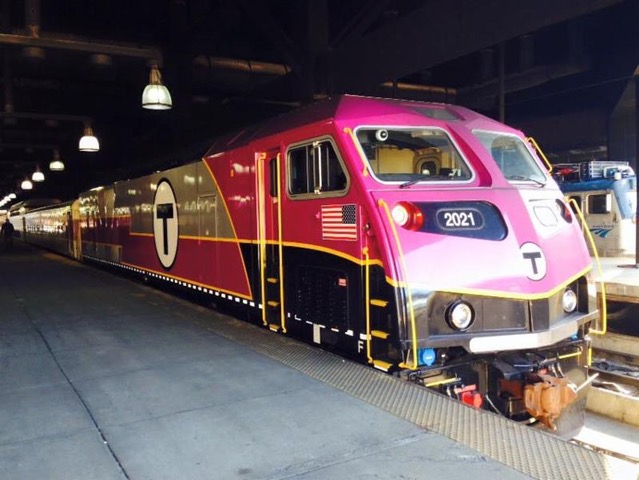 Mayor Jim Donchess is a strong advocate for commuter rail service between Nashua/Manchester and Boston. During the current 2018-2019 legislative session, Jim gave public testimony before both the State Senate and the House of Representatives on Senate Bill 241 in support of the use of existing federal funds to complete the critical Project Development phase of the NH Capitol Corridor Rail Expansion Project. This phase, recently enacted into New Hampshire law, is intended to provide detailed engineering, environmental, and geotechnical analyses as well as deliver a firm financial plan for expanding passenger rail from Boston to Nashua and Manchester.

According to the following data, the rail expansion project enjoys wide-ranging bipartisan support across the state:

In addition, the rail expansion project will deliver significant economic benefits to our city as well as to the state as detailed in the 2015 NH Capitol Corridor Study:

Mayor Jim Donchess and his Economic Development team are keenly focused on creating a business-friendly climate that attracts new businesses to the city, encourages expansions of existing enterprises, and adds new jobs to Nashua’s economy. Under Jim’s leadership, the city stands ready to assist and nurture Nashua’s businesses whenever it can. Jim and his team are also exploring how state and federal tax incentive tools to encourage economic development can be utilized in Nashua. In addition, workforce development programs and support for local entrepreneurship are of great importance to Jim’s administration.

Some recent examples of jobs creation and economic development in Nashua are as follows:

When Jim ran for mayor in 2015, he promised to work with the private sector to bring more than 500 new units of market-rate and affordable housing to downtown along with almost 1,000 new downtown residents. With several downtown projects fully completed or nearly constructed, Jim has already accomplished this ambitious goal. But with a less than 2% vacancy rate, Nashua continues to have a tight market for rental housing. Exciting plans for a second wave of new downtown housing are underway. Highlights of Jim’s housing agenda include: 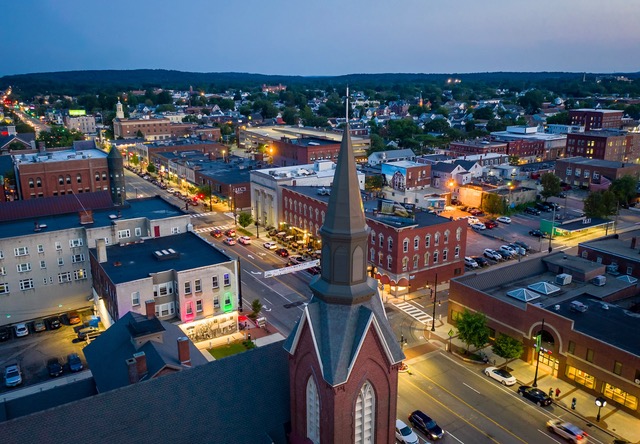 “Downtown Nashua – Main Street, the Millyard, and the nearby residential neighborhoods – is the heart of our city and contributes to our unique urban identity. It’s where our community gathers for entertainment, dining, celebrating, and shopping. When we’re downtown we’re always reminded of our rich and vibrant history. It’s even where our two famed rivers meet. A re-energized and revitalized downtown is critical to the quality of life we offer and essential for Nashua’s overall success. A top goal for me as the Mayor of Nashua is the cultivation of a 21st century arts, cultural, and residential neighborhood in our center city. That’s why we are focused on downtown.”

Jim’s efforts to transform our downtown include: 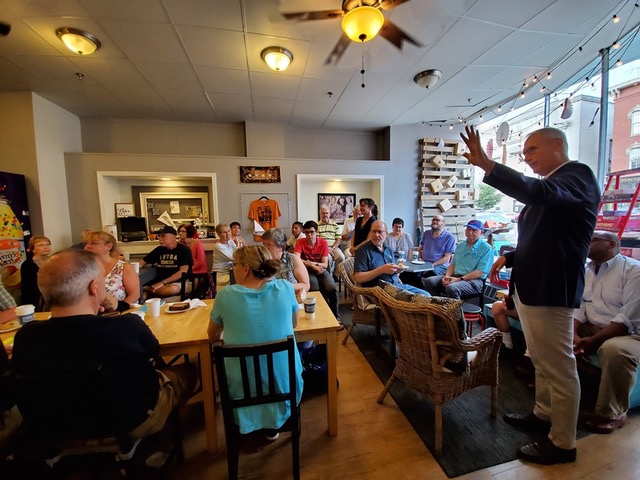 “I love meeting and talking with Nashuans at their homes, at their businesses, on our city streets, and in our cafes. I meet someone new almost every day. In these energizing conversations and at our lively forums I listen and I learn so much about our people’s concerns, and this helps me think about what we should try to do to make a better city. I also enjoy informing our people about the projects and programs we are undertaking in Nashua.”

Jim’s commitment to an open and accessible city government is a hallmark of his approach to municipal leadership. Throughout the year Jim holds public forums to encourage civic engagement and dialogue between the city and our citizens. These include:

Our Well-run City and Recent Accolades 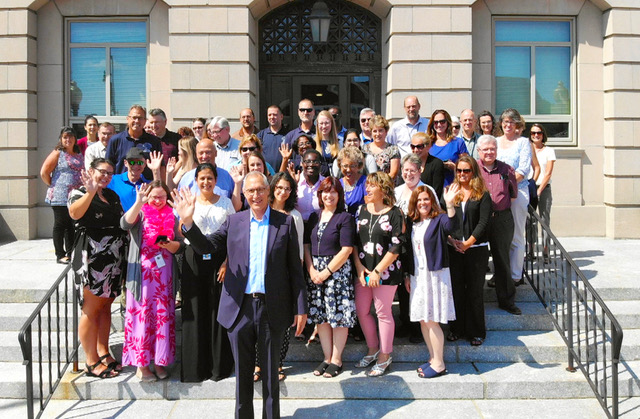 “New Hampshire has the highest reliance of any U.S. state on property taxes – more than 65% of all state and municipal tax collections – for the governmental services it provides to its citizenry. Because of this, one of my most important tasks as Mayor is to strike the right balance between our local property tax levy and the delivery of high-quality services that the people of Nashua expect and deserve.”

Jim and his Economic Development team are always focused on the expansion of Nashua’s tax base – projects, programs, and strategies to attract new businesses to the city, to encourage expansions of Nashua’s business enterprises, to facilitate a variety of new housing options in revitalized neighborhoods, and to welcome and assimilate a wide diversity of new Nashuans.

Since taking office, Jim has proposed four fiscally responsible city budgets despite significant budgetary difficulties such as additional pension funding downshifting by the state retirement system and the increased cost of health insurance for city employees, both major fiscal challenges beyond the city’s control.

Jim is proud of the recent accolades Nashua has received including:

Agenda on the Environment and Energy 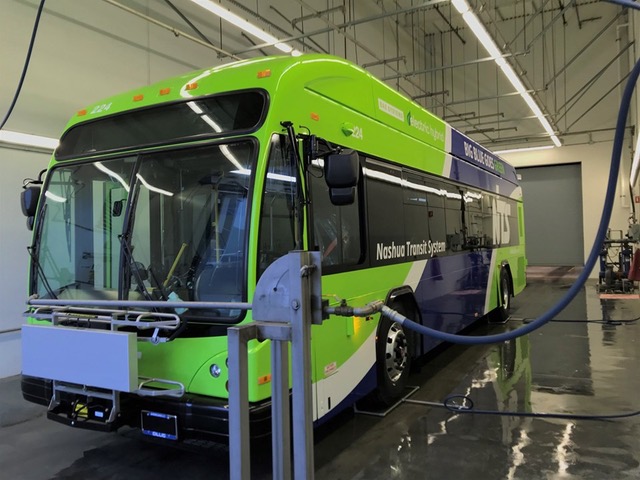 Under the leadership of Mayor Jim Donchess, Nashua is aggressively pursuing municipal energy cost savings through numerous green energy initiatives that utilize energy conservation, energy efficiency, and renewable energy. Nashua is also embarking on meaningful projects and programs to demonstrate our city’s commitment to accelerating progress on climate change. Jim’s initiatives and accomplishments on the environment and energy include the following:

“Americans spend a great deal of time on their homes – the front yard, the back yard, the private zone. But the public realm, what all citizens own together, has a collective value that is essential to the quality of life of a community.”

Jim’s efforts to support and initiatives to create new green spaces and places for recreation, celebration, play, and repose in Nashua include the following:

Our City on the Rise 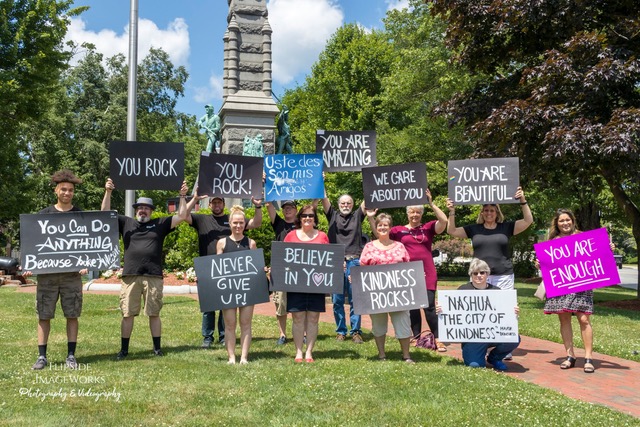